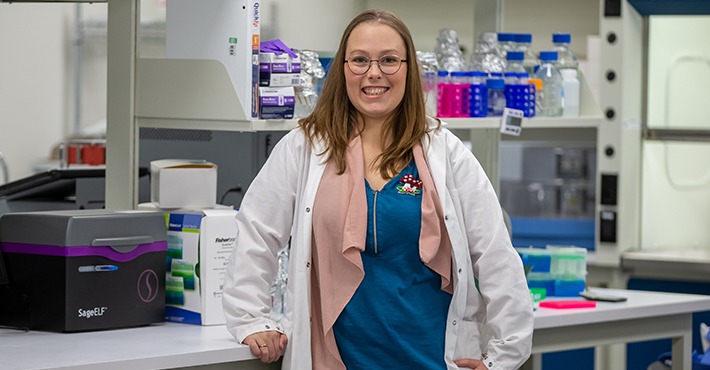 Saskatchewan’s short growing season and cold spring soils pose specific challenges to producers. Global Institute for Food Security (GIFS) researchers are screening large panels of soybean and canola for the ability to germinate and establish root systems under cold conditions. Promising germplasm, along with genetic markers, will be shared with our collaborators at AAFC and CDC for breeding into elite varieties.

It’s spring in Saskatchewan, and even though it’s already mid-April, much of the prairie remains covered in snow. Farmers are patiently waiting for the right moment to begin seeding for our short annual growth window. Timing is critical: sow too early, and seeds may rot in the cold soil; too late, and crops may not finish growing before frost in the fall. For some established prairie crops, like canola or wheat, maximum yields require optimum timing and a little luck. For other species, such as soybean, fitting into this limited growing window means the difference between a successful rotation crop and a failed field.

Growing soybean on the prairie

Soybean had a brief period of popularity in Saskatchewan, when acreage sown soared in 2017 to 840,000 acres; more than three times that of the previous year. However, soybean acreage slumped by half immediately the following season. Why were these prairie producers unimpressed with their soybean experience?

Global demand for soybean is growing faster than for any other North American field crop, at just over 1% per year. However, this is more than just a cash crop, and there are many advantages to adding soybean to a multi-year crop rotation. As a legume, soybean can help replenish soil nitrogen, which improves soil fertility. For example, corn yields in the USA have been up to 20% higher when grown after a soybean year. Soybeans can also aid in pest management; they have relatively few insect concerns, and the wide availability of glyphosate-resistant varieties enables cleanup of weed infestations. Soybeans sown on canola fields have also proved helpful in managing common canola diseases like clubroot and blackleg.

However, soybeans can only be successful in the prairies’ short growing season if they mature in time. Originally from temperate and tropical regions of Asia, soybean remains a “warm season” crop, requiring sufficient moisture and heat to thrive. Critically, current soybean varieties won’t germinate when soil temperatures are below 10°C. Seed are especially sensitive to cold water during imbibition (when water is first absorbed by the seed after sowing), and chilling at this stage can delay or reduce emergence and impact stand establishment. At the same time, very little is known about root growth in cold soils, as below-ground structures have traditionally received less attention than their above-ground counterparts. Surprisingly, emerged soybean can withstand frosts as low as -2°C for short periods, so cooler air temperatures are relatively less challenging than cold soils.

Currently, Canada’s productive growing region for soybean is limited to Ontario, Manitoba and the south-east corner of Saskatchewan, and expansion to the north and west is hampered by shorter growing seasons. Research and breeding efforts have focused on the development of “very early maturing” varieties, which have a reduced lifespan from emergence to harvest. Many of these varieties were bred specifically for growth in northern USA and southern Canada. However, even these varieties don’t reach maturity in time to harvest before the fall in most of Saskatchewan. Additionally, the reduced biomass and leaf surface area of these varieties at the time of pod development is often insufficient to support seed filling, leading to reduced yields.

Germinating and establishing in the cold – can we start the season earlier?

While research efforts to develop earlier-maturing varieties continue at several labs around the world, GIFS researchers are approaching this problem with a different strategy. What if, instead of shortening the period from emergence to maturity, we could engineer crops that can reliably germinate and thrive in cold spring soils? By developing varieties that can establish at cooler temperatures, we would enable producers to sow days or weeks earlier, effectively lengthening the growing season. Importantly, fast, robust germination minimizes the time that the germinating seed is sitting in the soil, at risk from environmental stressors and pest attack. Rapid development of root structures in early growth is also critical to improving stand establishment and ultimately, yield.

During seed germination, the embryo within the seed begins to grow, eventually bursting through the seed coat to reach the moisture and nutrients of the soil, and then emerging from the ground. This process is triggered by environmental cues, such as temperature and moisture levels, and biological cues, such as hormone levels. Proteins which were stored during seed maturation are now broken down to nourish the growing seedling. After emergence from the seed, the growing root tip develops into whole root structures that are required for seedling hydration, nutrition, and stability. The progression of germination to seedling root establishment is a complex dance, and requires the coordination of signals, receptors, genes and enzymes. Many of the steps in this complicated pathway are likely to be temperature dependent.

Our new research, taking place over the next three years, will screen extensive panels of soybean for genotypes which can germinate and grow in cold soils. This approach will identify genes, proteins and markers that are associated with cold-enabled germination and root growth. Varieties which successfully establish in cold soil field trials – along with relevant genetic markers – will be transferred to our collaborators at Agri-Food Canada and the Crop Development Centre. We can then breed these qualities into our elite varieties, generating high performing, early-sowing crops.

Applying these lessons to our established crops

Expanding the profitable growing region of soybean may be an admirable goal, but why stop there? This approach to crop development can be applied to any crop of interest – and there are many that would benefit from the ability to sow earlier in the spring.

As Saskatchewan producers know well, canola is Canada’s most valuable crop. In 2018, over 22 million acres of canola were sown across Canada, resulting in exports of over $11.1 billion. However, primary production of canola is not without risk. Even under ideal environmental conditions, only around 60% of sown canola seed successfully establish as seedlings, and early cold weather or snowfall during harvest can affect crop quality and reduce yield.

Early sowing of Canola can result in a number of benefits to producers. Early stand establishment improves rainfall and sunlight use efficiency and reduces erosion. Also, the risk from pest and pathogen attack during the early growth period is lower. Perhaps most importantly, canola is particularly sensitive to heat stress during flowering. Early sowing confers early flowering, meaning that flowering is finished before the typically hot July weather, reducing pod damage and improving seed set. Harvesting can also be moved forward, often meaning better harvesting conditions, and reduced risk of yield losses to an early fall frost. Of course, despite these potential benefits, early seeding is risky. Cold soil can delay germination, exposing the seed to increased soil pest and pathogen attack, impacting rate and uniformity of seedling emergence, and ultimately increasing time to maturity and reducing yield. And so, our producers anxiously wait, quietly assessing the risk-benefit balance as they determine the perfect moment to sow.

In developing these early-sowing varieties, we aim to alleviate the risks of early seeding, and unlock the potential benefits conferred to early-sown crops. For our producers, this may open opportunities for growing alternate crops such as soybean or may improve the yield of our established crops. In either case, the benefits to farmers of Saskatchewan or indeed, all of Canada, will likely be substantial.

Our thanks to the Saskatchewan Agricultural Development Fund for funding this important work.