Cause of wheat resistance to scab discovered

Synchrotron research could give rise to better yields and varieties

A nasty disease that can wreak havoc on wheat crops has been identified by scientists, allowing plant breeders to develop better varieties with higher yields for farmers.

Known as Fusarium head blight, FHB is a fungus that attacks the head of the wheat plant, causing the kernels to shrivel up and produce toxins, leaving the plant discoloured and completely inedible for people and animals. The disease may also be known as “scabs” or “blight”. 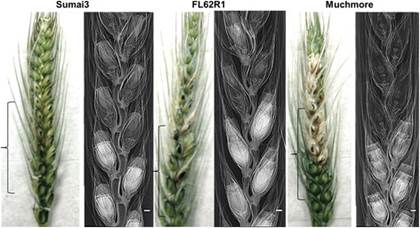 “Fusarium is a huge problem worldwide,” said Dr. Rachid Lahlali, Canadian Light Source (CLS) plant innovation research associate. “It can affect up to 50 per cent of crop yields around the world in certain areas. Obviously this is a huge problem.”

FHB affects wheat and barley crops in Canada and world-wide. China, parts of southern Africa, Eastern Europe, South America, and the U.S. have all recorded FHB outbreaks in recent years.

Lahlali and a research team from the CLS, National Research Council Canada, University of Saskatchewan, and Agriculture and Agri-Food Canada used the synchrotron to image both healthy and infected wheat spikes and florets to understand the development and progression of the disease.

“What we were trying to do using the synchrotron is to understand how the fungus infects the plant and see what kind of changes are happening,” said Lahlali. “And what we found are biochemical markers at the point of where the infection begins.”

Understanding how the FHB infects the wheat plant will be a huge advantage to plant breeders trying to develop FHB resistant varieties of wheat.

Lahlali and his team relied on novel techniques developed at the CLS to image living wheat plants. Typically, plants need to be destroyed or mutilated to conduct proper experiments of this type, but using synchrotron techniques, the group was able to see changes over time. By combining information from two different experiments – phase contrast X-ray imaging and infrared spectroscopy – the group tested the hypothesis that the structural and biochemical differences between resistant and susceptible plants play a significant role in developing resistance to FHB.

The results revealed significant differences between infected and non-infected plants, providing valuable information on both the infection and future plant imaging techniques.
“We were able to see the differences in the wheat infected by the fungus and our experiments showed us that the structures could be lost or altered, showing us traits that can be changed for the plants to become resistant to FHB.”

Lahlali said the next step is to look at other parts of the plant, including the cell wall, to determine structures and immunities that could lead to better varieties.

“Our goal is to identify biochemical markers for Fusarium resistance so plant breeders can use a reliable and fast screening method to develop better FHB-resistant types of wheat.”