Carinata and camelina: Giant opportunities thanks to AAFC

Agriculture & Agri-Food Canada research leads to new opportunities on the prairies
When most people in the Prairies look at fields of yellow, they immediately think of canola. But there are other yellow-flowered plants vying for attention. Ethiopian mustard (carinata) and camelina are both contenders. 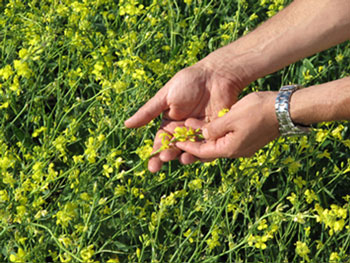 Photo: Staff at the AAFC Scott Research Farm inspect a carinata plot in 2010, two years before the first commercial variety was released.

Carinata Most people aren't familiar with carinata, but it holds strong potential for prairie farmers. It can grow on marginal lands and be used as a rotational crop with wheat and other cereal crops and, because of its high oil content, it's a promising alternative to petroleum based lubricants and biofuels.

In 2012, the National Research Council conducted the first-ever aviation tests of a biofuel made from pure carinata oil, with promising results. Currently, there are two commercial varieties of carinata in Canada, both of which were developed by Agriculture and Agri-Food Canada (AAFC). Dr. Kevin Falk initiated the carinata breeding program in the mid-1990s. “We wanted to broaden the scope of field crops farmers could work with,” says Dr. Falk. “Everyone saw the success we had with canola, and we wanted to see what other potential existed in the brassica family.”

Dr. Falk bred two successful varieties: AAC A100 (2012) and AAC A110 (2013) which were licensed to Mustard 21, a non-profit corporation created by the Saskatchewan Mustard Development Commission to advance market opportunities. One of the reasons why producers might like this crop so much is that carinata is well adapted to heat and drought, making it an option for those in Southwest Saskatchewan and southern Alberta, where canola does not perform as well.

As a bonus, the crop is generally similar to canola and mustard, so for the most part the established fertility, weed and pest control options, as well as harvest management practices can be applied to carinata. 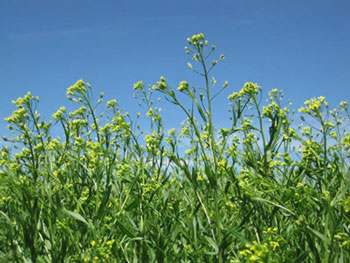 Camelina Another yellow-flowered crop that people may or may not be familiar with is Camelina sativa or camelina, an ancient oilseed crop that holds big potential for Canadian agriculture.

What kind of potential? Camelina requires less water than canola, matures early and can grow in cool climates. It is also showing to be a great feedstock for bioproducts such as bioplastics and can serve as a food supplement or a food product for humans, or a nutritious, protein-rich feed for cattle, poultry, and swine.

Much of Canada’s camelina knowledge comes from the hard work of many researchers at AAFC. In 2013, a public-private research team led by AAFC’s Dr. Isobel Parkin sequenced the camelina genome, but, well before that achievement, AAFC researchers Richard Gugel and Kevin Falk dusted this seed off and brought it to life.

In 1999, Richard Gugel, a curator at the Plant Gene Resources of Canada seed bank in Saskatoon, was growing some camelina in field trials and noted its uniformity, early maturity, lack of disease and pest problems, and relatively good overall agronomic performance. The results of oil, protein and fatty acid analyses of the harvested seeds were also promising. At this time, a groundswell of enthusiasm for industrial feedstocks (both oil and meal) was emerging.

Industry needed a crop that would not cross with other oilseed crops or easily mix with and contaminate other oilseed markets. The time was right to bring camelina off the seed bank shelf and into the research lab. Dr. Kevin Falk, who had already bred several varieties of Polish canola and Ethiopian mustard (carinata), agreed to work on camelina with Gugel, as a side project. After some field trials to evaluate agronomics and seed quality, they had the basis for a breeding program.

Promising early results gave Falk the industry support needed to continue research on camelina. The first variety they released was called Midas, due to the oil’s bright yellow-gold colour.

Today, AAFC scientists continue developing camelina as a crop for the Canadian agricultural landscape. Both carinata and camelina show promising results. With a bright future on the horizon, expect to see more yellow fields.