Canola: A story of public-private partnership

“For canola, without public-private partnerships, the development of genetically modified varieties wouldn't have happened. It makes sense to partner.” 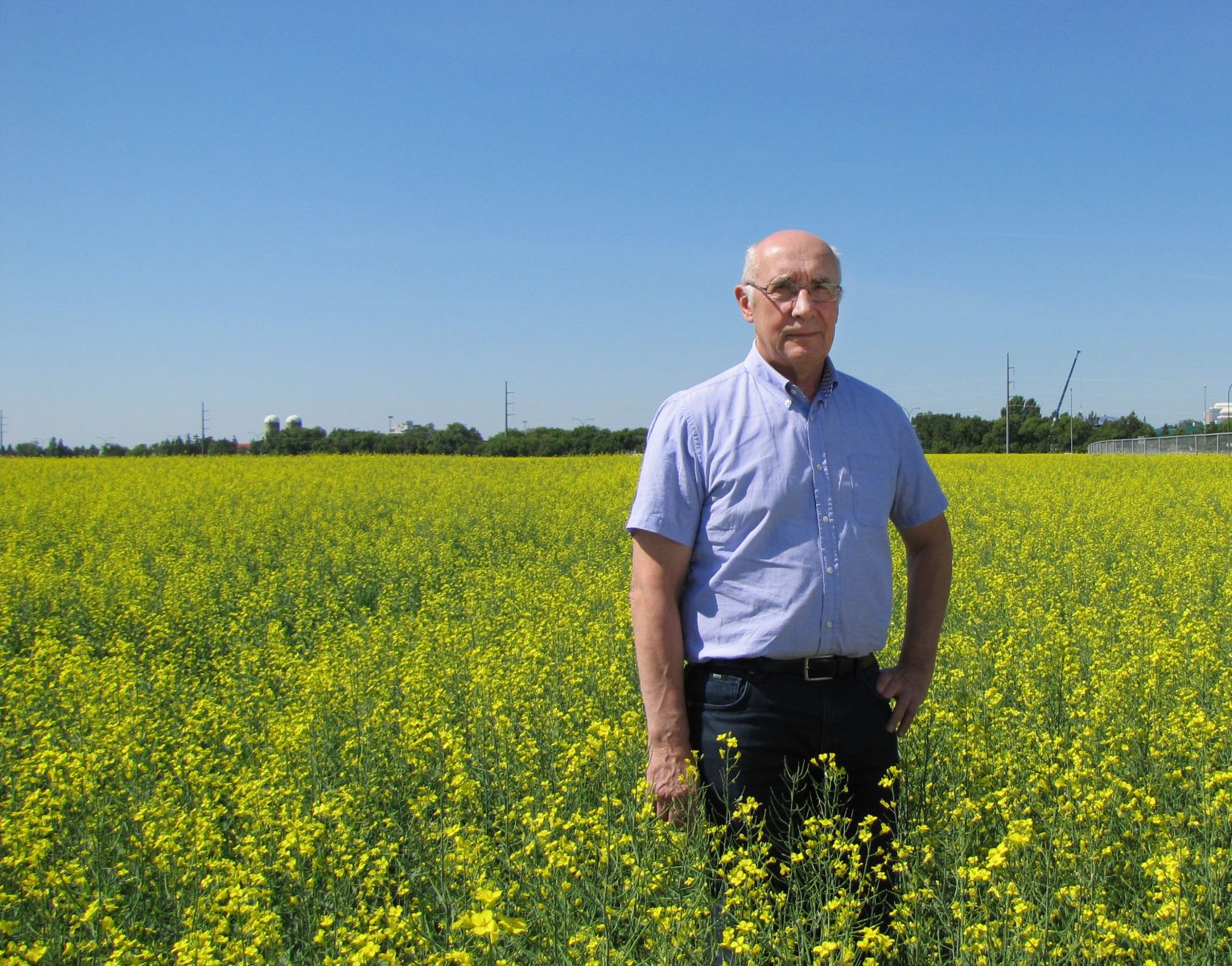 While working as a research scientist during the early 1980s in a lab for Agriculture and Agri-Food Canada (AAFC), Keller developed an innovative method for producing plants from pollen. He used only male canola plant pollen, and bypassed nature’s need for female-plant involvement. Keller recalls being able to “teach or trick the pollen to grow into a plant directly, like going from a sperm cell to a whole animal.” This one-sided reproductive system accommodated screening desirable genetic traits from only a male parent, known as a haploid plant. Keller knew, however, that this system had limitations. “The haploid plant was not able to reproduce on its own. By itself, it had no real value commercially.” So Keller employed a previously established technique that involved treating haploid plants with colchicine, a crocus plant derivative, to bring them up to self-breeding capability as double-haploid plants.

In 1985, Hoechst, a German-based chemical company, became involved. By this time, word of Keller’s double-haploid breeding technology had reached the ears of Maurice Delage, Senior Manager of Hoechst Canada. In their university days, Keller and Delage had befriended each other. During an Ottawa visit in 1985, Delage invited Keller to dinner, and their conversation naturally turned to Keller’s innovative breeding research. Delage saw potential in engaging Keller’s discovery with a gene for resistance that Hoechst possessed as a result of developing Liberty, a herbicide. Consequently, Delage seconded a scientist from Hoechst in Germany, Michael Oelck, to bring the gene to Canada to complement Keller’s innovative tissue-culture technology.

In 1989, Oelck and Keller made a significant breakthrough while working together in the AAFC Ottawa lab. Oelck took Keller’s double-haploid plants and chopped them up in a blender. “Michael called it ‘sludge’. It was a green mass of gunk.” Then, Oelck inserted a bacterial strain carrying Hoechst’s gene for herbicide tolerance into this “sludge,” and poured it into petri dishes. Finally, herbicide was applied to kill all cells except those that had adopted the beneficial gene for tolerance. Soon afterwards, the two scientists noticed that their genetic-transformation experiment had only one survivor.

Keller remembers their excitement about noticing “…one green spot. It likely had accepted the gene for herbicide resistance and could now tolerate the herbicide and start growing.” The resultant plant produced seeds that grew into more plants, consistently herbicide-tolerant plants. In 1990, Keller moved from Ottawa to Saskatoon to work at NRC-PBI. Michael Oelck also relocated to Saskatoon, and began establishing a Hoechst research group who interacted with researchers from NRC-PBI and AAFC. The seeds from the herbicide-tolerant canola plant developed in Ottawa were now intensively field tested in partnership with Agriculture and Agri-Food Canada.

By 1995, Innovator became the first registered commercial herbicide-tolerant canola. Keller summarizes the vital role each partner played in his public-private partnership experience involving canola development. “AAFC Ottawa developed the tissue-culture (double-haploid) system for regenerating plants; Hoechst had the gene for resistance; NRC-PBI (Saskatoon) became involved in the refinement and quality control; and AAFC Saskatoon put the plant in the field to commercialize the product.” “For canola, without the public-private partnership, it wouldn’t have happened,” he declares.

Since 1995, what Keller and his P3 partners developed has evolved into a major crop for Saskatchewan and Canada. In 2011, over 26,000 Saskatchewan farmers grew canola, contributing $5.4 billion to the province’s economy. That year, Saskatchewan accounted for 50.5% of Canada’s canola-growing crop land; in fact, more canola than wheat was grown in SK soil in 2011. Presently, seven canola-processing plants preside in the province: four for oil, two for specialized protein and one for biodiesel. Indeed, canola is a major player in Saskatchewan’s economy.

Saskatchewan’s canola industry also contributes significantly to Canada’s economy. In 2010, this province produced 42% of Canada’s canola, and served as the nation’s leading exporter of canola seed, oil and meal ($2.7 billion). Recently, canola has been planted in 21 million acres of Canadian soil; most of these seeds are GM varieties. Annually, canola contributes over $15 billion to Canada’s economy. A major buyer of canola oil and meal is the United States ($2.3 billion). Important markets for raw seed include Japan ($1.2 billion) and Mexico ($792 million). China’s importance as a canola importer is growing. In 2012, canola was Canada’s top 2012 revenue crop, generating $8.1 billion in farm gate receipts.

By growing HT canola, farmers have benefitted economically and environmentally. Dr. Stuart Smyth, a professional research associate at the University of Saskatchewan, has found that this crop technology benefitted western Canadian producers by up to $1.2 billion during 2005-7, partially due to lower input-and weed- control costs. Keller elaborates: “It increased the yield because you had less weed competition. It actually gave you a cleaner product. It reduced farmers’ input costs because you needed only one chemical treatment. There’s also reduced fuel use because you’re doing only one spray.” Smyth’s canola-crop research also revealed that herbicide toxicity decreased between 1995-2006, thereby decreasing farmers’ exposure to chemicals – and the Earth’s as well.

Canola producer Wayne Truman has grown HT canola for almost 20 years in Redvers SK. “Prior to GM canola, we would grow canola, and we weren’t really sure what to expect. We would get maybe a 20-25 bushels [per acre] crop and think, ‘Wow, that’s a real good crop.’ We weren’t able to control the weeds. With the addition of GM canola, we can now spray it, and we can have as clean a crop as any other crop. We’re striving for 40-45 bushels [per acre] canola, and that was absolutely unheard of prior to the offering of GM canola.” Truman notes that weed control also serves as an investment in future canola crop quality.

“You don’t have all those weed populations for the next year that you’re contending with either.” Because producers can comfortably choose to rotate canola crops with cereal and pulse crops, soil quality has improved. Truman states, “I’ve noticed a lot more earthworms the more you rotate your crops.” Truman looks forward to growing canola when its turn comes up in a crop-rotation cycle. “From a farmer’s perspective, growing GM canola brings profitability. It’s good for the farmer who grows it; it’s good for the consumer who’s using it; and good for industry who’s exporting it. It’s a win win win situation. “Canola is the smallest of seeds but brings the biggest of results.” In the future, Keller sees other innovation opportunities in SK and Canada for public labs and private companies partnering in order to explore aspects of the canola plant. “Quite often, public labs have genetic material, whereas commercial organizations have specific pieces, like a herbicide tolerance gene or a gene for something else.

“Those are the best partnerships, when everyone has a contribution. When you put that all together, you’ve got the complete package.” He believes that there are many aspects of the canola plant yet to explore. “How can we understand the photosynthetic capacity of a plant so that it can do more to support humanity? You could look at how roots use fertilizer, making that process more efficient. Climate change and weather-related activities have always been a challenge in agriculture in western Canada. You could look at tolerance for frost, drought, heat, pests and flooding.” Keller also thinks that canola-variety quality can be improved regarding its use as an oil crop, a fuel crop, and a meal product. “Actually, the protein in canola meal is superior for human nutrition to soybean meal [used in tofu], but we’ve not done enough work on it,” he points out.

Keller is enthusiastic about the future of canola research, development and commercialization. “Could be a golden era coming up. I see tremendous opportunities in Canada and SK for public-private partnerships. They are going to continue to be most important for agriculture down the road. They are critical.” _______________