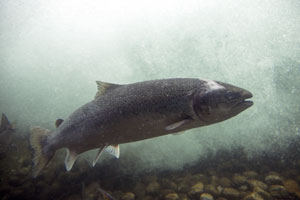 It seems ironic but a solution to the overfishing crisis in the worlds' oceans can be directly tied to the productivity and ingenuity of dryland farmers in Western Canada.

A new research study confirms that meal and oil derived from the oilseed plant Camelina sativa can effectively substitute for oil and meal in fish feed. This has major implications for the aquaculture industry and for sourcing high Omega3 oil for a rapidly growing human population.

A decade ago the World Wildlife Federation (WWF) identified massive volumes of wild fish were being fed to caged farm fish: “Four kgs of wild-caught fish are needed to produce 1kg of farmed fish,” it said, noting the practice was placing an unsustainable strain on the world's oceans, threatening the global fish supply.

As with humans, most farmed fish obtain vital Omega3 fatty acid nutrients through their diets, that is by consuming "feed-grade" fish. This unsustainable practice led to efforts to find land-based substitutes for wild fish as feed in aquaculture, which produces almost 60% of the world's fish supply.

“The proportion of wild fish that is going towards industrial use as opposed to feeding people is very high and this roundabout way of supplying nutrients isn’t very sustainable,” Stefanie Hixson, post-doctoral fellow at the department of chemistry and biology at Ryerson University, recently told the Manitoba Co-operator. “It is also getting more and more expensive for commercial feed companies to purchase fish oil," Hixson told The Co-operator. "So the commercial fish feed industry is looking for an environmentally and economically sustainable alternative for fish oil, and that is where camelina comes in.”

In the study published in the scientific journal Aquaculture, scientists Chang Ye, Derek Anderson and Santosh Lall investigated new feed ingredients from camelina for Atlantic salmon. The trio, in the Department of Plant and Animal Science at Dalhousie University (Nova Scotia), found that camelina oil is as nutritionally good as fish oil fed to farmed fish. And it contains health-promoting factors for fish intestine. Solvent extracted camelina meal can be used at 5% in the diet, the study said. The growth rate of Atlantic salmon was not significantly affected when the fish oil they were fed was replaced first by 50% camelina oil and then by 100% camelina oil.

These findings add to the expectation that a terrestrial source of essential fatty acids can reduce the world's reliance on fish meal and fish oil as feed in aquaculture in the very near future. This is a major step forward for global aquatic sustainability. The global fish oil market was valued at $1.69 billion in 2012 and is expected to grow 8.7% annually from 2014 to 2020. In the meantime, the value of the international aquaculture industry is expected to double in value between 2010 and 2020 from about $110 billion a year to more than $200 billion. 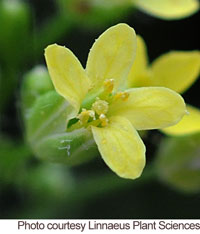 Saskatoon-based Smart Earth Seeds is pioneering development of highly sought-after essential fatty acids found in unique and promising plants such as camelina. Smart Earth Seeds contracts with producers and sells camelina. The company also is working to improve the agronomics of camelina, such as increasing seed size and introducing broadleaf weed control for camelina while responding to rising market demand for this unique oilseed.

Prospects for camelina in this market segment are very exciting, especially when set against the backdrop of the recent sale of Norwegian salmon-feed supplier Ewos to Cargill, for example. In the past decade, Ewos has reduced by 50% the quantity of marine ingredients in aquafeed so that fish only makes up a portion of the feed given to salmon, which has been partly replaced by vegetable meal and oils.

The International Society for the Study of Fatty Acids and Lipids recommends a daily intake of 500 mg of Omega3 (EPA + DHA) for optimum cardiovascular health and, projecting this to a population of 7 billion, this amounts to a total annual requirement for over 1.25 million metric tonnes of Omega3 fatty acids, a volume that is not currently sustainable.

The opening of the global aquaculture market for camelina – a unique oilseed crop that can be grown with very low input costs – is good news for Canadian agricultural producers and potentially great news for the world's oceans.