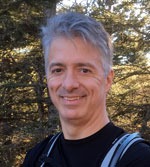 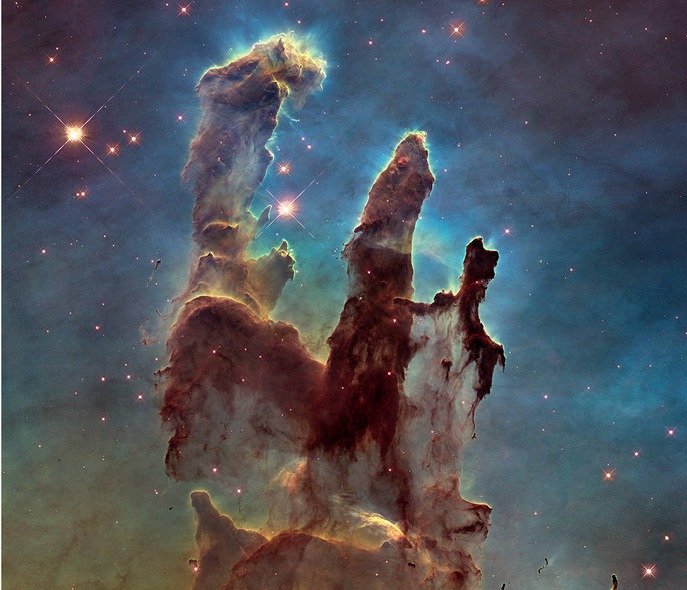 A wispy, ghost image rotates on the screen, evoking an itch in my mind. Organic, alive, awe-inspiring, the image teases at a memory. Then I have it: The Pillars of Creation.

The Pillars are part of the Eagle Nebula in the Serpens constellation (the “handle” of the Big Dipper points towards it). It’s a “stellar nursery,” that is, a place where gas and dust coalesce into greater and denser masses until pressure and heat sparks the nuclear fusion of new stars.

But the image on the screen over my pint of Guinness at Café Sci Saskatoon depicts the beginning of something else. It is a three-dimensional, extremely high-resolution scan, done at the Canadian Light Source synchrotron. It isn’t an interstellar nebula spanning light years; it’s a chicken embryo a few millimetres across.

What sparked my mental flight of fancy is a collaboration between an artist and a scientist: Saskatoon sculptor Jean-Sébastien Gauthier and Brian Eames, who uses the CLS to study embryology within the context of evolutionary developmental biology.

As the pair define it, their “scientific art,” or “sciart” is more than simply taking attractive images and putting a frame around them. It is an act of intent, to purposely make a statement, or uncover a statement waiting to be made.

In this case, that statement is one of connectedness, the commonality of all living things. Embryos of chordates – things with backbones like us – share similar structures. Indeed, at some stages, embryos of chickens, zebrafish and humans are hard to tell apart. Gauthier pulled in another comparison: the uncanny resemblance among embryos and the Venus figurines, the earliest artistic depictions of the human form carved tens of thousands of years ago, perhaps reflecting the birth of religion.

Eames and Gauthier’s collaboration has so far resulted in several presentations and Dans la Mesure/Within Measure, an interactive multimedia installation presented at venues including Nuit Blanche and Gordon Snelgrove Gallery in Saskatoon. There were multicoloured projections where embryos grew and shrank, rotated and moved like holographic spirits. There were 3D printed models, including a two-metre zebrafish (life size is about two centimetres long), with light treatments that created the illusion of transparency with skeleton visible, adding layers and culminating in colourful scales.

What struck me about this collaboration is how it sparked forth unbounded discussion at the Café on everything from the purpose and limits of science, what defines art, and the philosophy that may underpin it all. It seemed to tap into people’s creative impulses in unexpected ways.

Five hundred years ago, the original Renaissance man, Leonardo da Vinci, wrote, “To develop a complete mind: Study the science of art; Study the art of science. Learn how to see. Realize that everything connects to everything else.”

Too often today, artists, scientists and engineers put themselves in silos and peer over the ramparts with suspicion and even disdain at the denizens on the other side of the walls. “Their” values, “their” world views are too different than ours, and too difficult to understand.

Difficult, but not impossible.

I know a musician whose position on GMOs was what one might expect: suspicion and opposition. To her great credit, she sat down and had lunch with a scientist that had actually done the genetic engineering to develop new crops. To his credit, he listened to her concerns and accepted them as valid. They discussed, they listened, they learned. In the end, she changed her mind on GMOs. And I suspect he learned much about why intelligent, creative non-scientists might be suspicious of these technologies.

As humans, we are rationalists and dreamers. Rationalists speak to our heads: they try to figure things out, find the facts, explain the world in ways that can be quantified and predicted. Dreamers, less bound by fact and enticed by imagination and possibility, speak to our hearts – and so many of our actions are driven by the heart.

We live in a world where science is under attack. Vaccines, responsible for saving more lives than all other medical advancements combined, are under renewed suspicion. Modern agriculture technologies such as genetic engineering and pesticides are the targets of well-intentioned but misguided activism.

Climate change, how we generate energy, whether or not we should put fluoride in our drinking water, all are contentious issues that would not be, if mere facts were enough. They are not. Science needs those who are expert in speaking to the heart: we need the artists.

All of us, whether scientist or artist, rationalist or dreamer, are human. We share common ground in our urge to discover and create, our internal yearnings and compulsions, our responses to the world that surrounds us. We need both perspectives to progress.

Michael Robin is a Saskatoon-based science writer. Republished with the author's permission.

Photo: The Pillars of Creation. NASA