An interview with Nina Fedoroff

John Gormley, host of NewsTalk 650 John Gormley Live, took the opportunity to interview Dr. Nina Fedoroff when she was in Saskatoon last fall to speak at the Agricultural Bioscience International Conference (ABIC 2014). Fedoroff pioneered in DNA sequencing, determining the nucleotide sequence of the first complete gene. 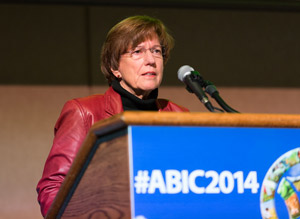 In 2007 she received the National Medal of Science in the field of Biological Sciences, “the highest award for lifetime achievement in scientific research in the United States.” She served as President of the American Association for the Advancement of Science (AAAS), and was Science Technology Advisor to U.S. Secretaries of State, Condoleeza Rice and Hillary Clinton. Fedoroff is currently an Evan Pugh Professor of Biology at Penn State University.

JG: Welcome to Western Canada and thanks for being here.

JG: In terms of the perception issues, are GMOs starting to do any better in the court of public opinion against a group of very outspoken critics?

NF: Well they did start to. I mean they’ve been around now for more than a quarter century. I developed some of the early techniques back in the 1970s– that’s a long time ago. Yes, whenever there’s a new technology there’s always lots of rumors about how it’s so terrible. Those tend to die down. This issue hasn’t gone away; in fact in the last couple of years it’s really gotten quite a new life, because now there are lots of people that are now pushing on it very hard. It’s a puzzle. It hasn’t taken the usual course of a new technology.

NF: I really don’t know what to tell you, except that it has to do with food. People are really very sensitive about food issues, but there’s another dimension. Some sense we’ve all gotten away from farming (less so here in Canada). Most people live in cities today and they don’t know where their food comes from or how it’s made or how plants have been changed– genetically modified over thousands of years to create what we have now. Now big heirloom tomatoes are not wild; we make them. Corn is something we made; people don’t know that. They grew up with what they think is natural. They think what’s coming up the pike is not natural– and we really like natural now.

JG: Is there any corporate overlay? I see an intense dislike by the anti-GMO people of large corporations, agriculture or otherwise. That appears to be quite a dividing point too.

NF: Yeah, and that’s equally a puzzle. You know, it used to be that we considered it a technology transfer: You discover something in the laboratory and it eventually gets out into the market. We did that with hybrid corn. That was discovered by a scientist and it eventually became a company– and there’s a lesson in that because back when hybrid corn was first becoming adopted back in the 1930s people really pushed back. Farmers pushed back; they didn’t want to buy their seed corn and so forth. Then they realized it was better and adopted it. But today we have different society– our whole civilization has changed. We are urban: We Tweet, we communicate instantly. But we don’t stop to find out if the opinions we formed are valid or not, and somehow the big agricultural companies have become ‘whipping boys.’

JG: I sense that a lot of the critiques from the anti-GMO people are getting more extreme than ever before.

NF: Yeah, everything from infertility, to obesity, to autism, to cancer. None of it’s true.

JG: How do you rebut that?

NF: Evidence. In science we have something called the weight of the evidence. If one paper says that GM feed causes cancer in rats and one says there’s no problem, then you don’t know which one to believe right? But if 10 papers say there’s no problem and one paper says there is, you’re more likely to go with the 10 papers. If its 1000 papers that say there’s no problem and 25 years of research, then one paper comes along and says “Oh Gosh! This is causing huge tumors in rats” and nobody’s seen them before, you kind of have to discard that. But it gets an awful lot of attention, especially when you put it on the internet with pictures.

JG: Yes. The role of the precautionary principal is something that I’m seeing invoked more and more. The idea is you must do nothing on the risk or possibility that something– not yet proven or demonstrated– could happen. Am I over simplifying that?

NF: No you are not, and it really is quite stultifying. But again you have to look at what’s happened; we live in a much safer environment than we ever did. We’re victims of our own success. And now we turn around and we kind of expect everything be proven perfectly safe before we take a step and that’s not possible. You don’t have anything new if you’re not willing to take a risk, it’s that simple. So we’re shooting ourselves in the foot with precautionary principle.

JG: But where did this come from? It sounds so science-y. I first saw this in the nuclear debate years ago. But the more I began to read, I thought: If this was in place and taken really seriously, we wouldn’t have innovation or research of any sort.

NF: Absolutely, that is absolutely true. And that’s why I say we’re shooting ourselves in the foot with it. Where did it come from? The best I can tell you is what I already said: that we’ve created much safer environments. You know, modern medicine, modern sanitation; all that stuff creates a much safer environment. And now we turn around and assume that now anything new has to prove itself before we’re going to take any risks. We’ve become very risk averse. That’s the best explanation I can give you.

JG: In a culture and in a time when, as you say, we’ve never been safer.

NF: That’s true, but there’s also another thing here, and that is that we’re not really very good at making a gut decision about what’s safe and what isn’t safe. People worry about flying in airplanes, but it’s a lot safer– if you look at the statistics– than driving in a car. But we’re perfectly comfortable jumping in our car. There’s something about our risk perception, it isn’t serving us very well. It’s just kind of who we are.