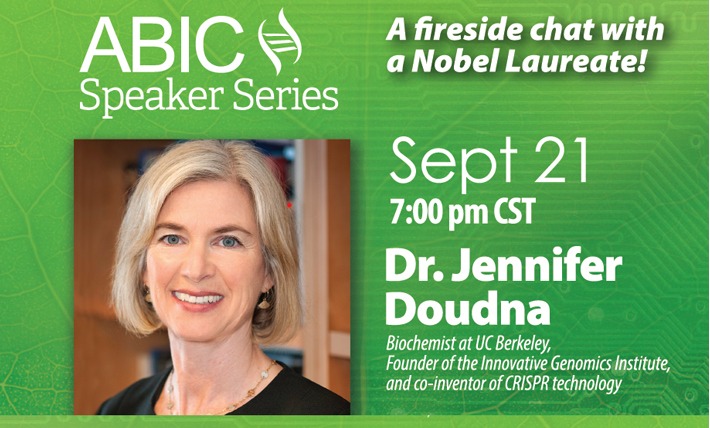 Doudna is a biochemist from the University of California Berkeley and is best known for winning the 2020 Nobel Prize in Chemistry for her work on CRISPR CAS-9. Doudna is an investigator with the Howard Hughes Medical Institute, senior investigator at Gladstone Institutes, and the president of the Innovative Genomics Institute. She co-founded and serves on the advisory panel of several companies that use CRISPR technology in unique ways.

Doudna spoke with Ag-West Bio’s president and CEO, Karen Churchill, about the use of this powerful genetic tool in agriculture and human health.

“CRISPR opens the door to fundamental research that in the past would have been difficult or impossible to do,” says Doudna. Doudna collaborated with Emmanuel Charpentier, a French researcher, and the two scientists first published their data in 2012. This led to a rapid adoption of the technology, which Doudna attributes to the overwhelming need for these tools within the scientific community.

CRISPR is an adaptive immune system that is found within bacteria and is the way that these microbes fend off invading viruses. By harnessing and manipulating this system, scientists have been able to accelerate natural processes with precise gene editing.

Doudna is excited about the ways CRISPR can be used in agriculture — from understanding crucial plant genes to increasing desirable traits like drought tolerance. Doudna believes that this research will pay off in the future as we deal with the effects of climate change. The adoption of CRISPR in agriculture will come down to how people perceive the technology, Doudna says, emphasizing that scientists need to be clear about the benefits and risks of new research. Misinformation is difficult to navigate and Doudna believes that scientists need to be speaking more publicly about their discoveries.

“We need to involve everyone in science,” Doudna says. That includes both opening channels of communication with the public and diversifying the profession. “The more diversity we can have in science the better because we just don’t know where the next great idea will come from.”

Doudna says that she sees more women in science than when she first started her career but cautions that there is still a lot of work to be done. Women scientists still have difficulty getting ahead in the health and biotechnology industry and women in positions of leadership are still few and far between.

When it comes to the future of CRISPR, Doudna believes there are a lot of opportunities that haven’t been explored, including medical imaging and diagnostics. While it’s difficult to predict how science will be applied in the future, Doudna says that investment in fundamental knowledge can play out in ways we can’t predict. The mRNA vaccine technology for COVID-19 is an example of decades of research being used to tackle a new and unexpected challenge.

Whatever the future may bring, Doudna is very optimistic about the solutions science can offer.

“There are so many technologies coming together, both in biology and engineering, that are converging.” says Doudna, “We are on the verge of new discoveries and opportunities that we couldn’t have imagined until recently.”

Watch for information on the 2022 ABIC Speaker Series events at abic.ca.