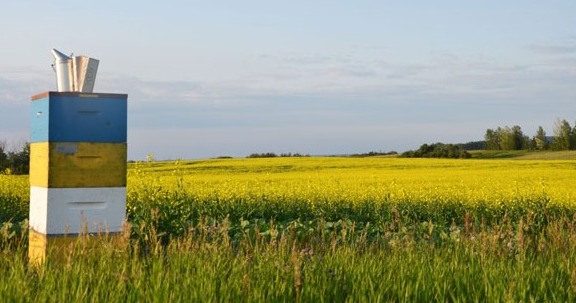 When I look out my kitchen window, I see a peaceful scene with two honey bee colonies buzzing next to my vegetable garden. As a hobbyist beekeeper, I have a responsibility to keep my backyard colonies healthy. In turn, these healthy bees not only provide me with delicious honey, but also enhance the production of fruits and vegetables in my garden. Although my backyard is a microcosm of the much broader agricultural production systems which define Saskatchewan; healthy honey bee populations remain vital to the success of Saskatchewan’s agroeconomy.

Saskatchewan is home to approximately 112,000 honey bee colonies which produce approximately 25 percent of Canada’s honey. One of the primary sources of nectar for Saskatchewan honey bees is canola. Each June-July,  the canola bloom allows Saskatchewan beekeepers to produce some of the highest honey yields in Canada, with average honey harvests of 80 kg per colony in 2019. Even though canola does not require insect pollination to reproduce, foraging honey bees are known to enhance canola yield and quality. A Canadian study found that the addition of three honey bee hives per hectare of canola increased yield by 46 per cent compared to canola fields with no honey bee hives, largely due to an increase in seeds per plant.

In Sweden, pollination of canola by honey bees and other wild insects was observed to increase seed weight and oil content, resulting in a 20 per cent contribution to the market value of the canola crop. The annual value of honey bee pollination services to canola production in Canada has been estimated at $1.7 billion, with an additional $1.4 billion contribution from the use of managed honey bee pollination to generate more productive, hybrid canola varieties.

In Saskatchewan, the partnership between honey bees and agriculture appears to be win-win. However, even though canola provides nutritious food for Saskatchewan honey bees, beekeepers in the province continue to face difficulties in maintaining the health of their colonies. Increasing acres of cultivated land in Saskatchewan has minimized forage for bees outside of agricultural bloom periods, resulting in nutritional stress for honey bee colonies.

Harsh winters present an exceptional challenge for Saskatchewan beekeepers who lost on average 21 per cent of their colonies in winter 2018-2019. To prepare their colonies for winter, beekeepers must follow a strict regimen of disease management, which includes acaracide treatments for parasitic mites, as well as antibiotic therapy for bacterial disease.

Pesticide exposure is another potential threat to the health of Saskatchewan honey bees. In excess of 95 per cent of Canadian canola is grown from seed treated with a neonicotinoid insecticide for control of insect pests such as the flea beetle. Neonicotinoid insecticides translocate into the nectar and pollen of the canola plant, resulting in exposure of foraging honey bees to neonicotinoid residues during the canola bloom. Not surprisingly, there is widespread contamination of Saskatchewan honey with neonicotinoids, at average concentrations of 8-17 parts per billion (ppb).

Interestingly, research conducted at the University of Saskatchewan found that honey bee colonies chronically exposed to 20 ppb of neonicotinoids experienced 30 per cent decreases in honey production and 15 per cent decreases in overwinter survival relative to controls, suggesting that environmental concentrations of neonicotinoids should be maintained below 20 ppb to optimize the health of Saskatchewan honey bees.

Saskatchewan farmers recognize the benefits of honey bee pollination to the productivity of their crops and they are playing an active role in supporting healthy populations of pollinators in this province. Saskatchewan was the first Canadian province to adopt DriftWatch, a digital communication tool which allows farmers to alert surrounding beekeepers about upcoming aerial pesticide applications to their fields.

In partnership with the Syngenta’s Operation Pollinator and the Saskatchewan Soil Conservation Association, farmers converted the non-productive edges of their fields into pollinator habitat, boosting production of their cultivated acres. By promoting the value and importance of honey bee health, Saskatchewan farmers may also enhance their relationship with consumers, who value the security and sustainability of their food.

From backyard gardeners to corporate canola farmers, we all benefit from the pollination services provided by honey bees. In 2016, the annual value of honey bee pollination services to Canadian agriculture was estimated at $5.5 billion. By acknowledging the importance of honey bee health to our food production, we will ensure that Canadian farmers continue to be leaders in sustainable agriculture for years to come.