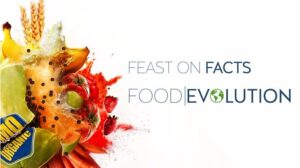 In celebration of Ag Month join us for a free screening of Food Evolution, narrated by Neil deGrasse Tyson and directed by Scott Hamilton Kennedy. The movie will be followed by a panel discussion and audience questions.

“What Scott Hamilton Kennedy captures in his scrupulous, optimistic documentary Food Evolution is the new reality for American scientists: the challenge of reaching a public bombarded by conspiracy theories and fearmongering.” LA Weekly review

Watch the trailer  | View the poster